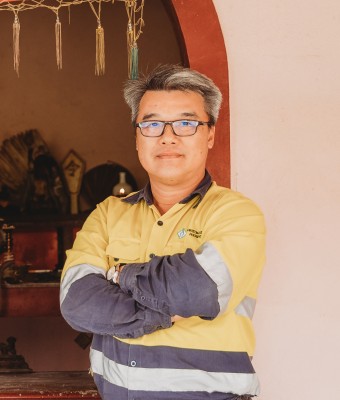 The seventh month of the Chinese lunar calendar is the “Ghost month” and the fifteenth day is the “Ghost Day” according to Chinese customs and beliefs. For Christmas Islanders, it’s simply the Hungry Ghost Festival.

“You’ve got to be really unlucky to bump into a ghost who is having a month-long holiday on Christmas Island,” says Patrick Chan.

This has been a cultural tradition as long as he can remember.

Patrick, who is in his forties, moved to Christmas Island in the mid-70s with his family from Malaysia when his father worked for the previous mining company.

Following in his father’s footsteps as a miner on Christmas Island, Patrick stays connected to the traditions of his family’s ancestral home in what is today known as Guangdong in southern China.Patrick is a practising Buddhist who continues to observe the Chinese cultural customs and festivals he grew up with on Christmas Island and is determined to see them passed along.

“I would like to see these Chinese traditions, which is a cultural heritage passed on to future generations,” he says.

“They are interesting and would make a great conversation topic.”

According to Chinese customs all over the world, the seventh month in the lunar calendar is when the gates of Hell are opened to give reprieve to those spirits suffering in the Underworld. It is believed that the spirits are given this month to expunge or redeem themselves from their sins in their previous life.

At the centre of the festival is the Taoist temple in Drumsite which venerates the deity Sheng Wong.

“Sheng Wong is both the City Magistrate, protector of the Island and community, and the Chief Magistrate of Hell, who will receive the prayers and offerings for the un-named souls,” Patrick says.

The Hungry Ghost Festival begins on the first day of the seventh month, when Sheng Wong opens the gates of Hell to allow the souls to wander free.

A hive of celebratory and prayer activities, followed by a feast afterwards in the twilight hours in the evening at the Sheng Wong temple, marks the start of the month-long festival. 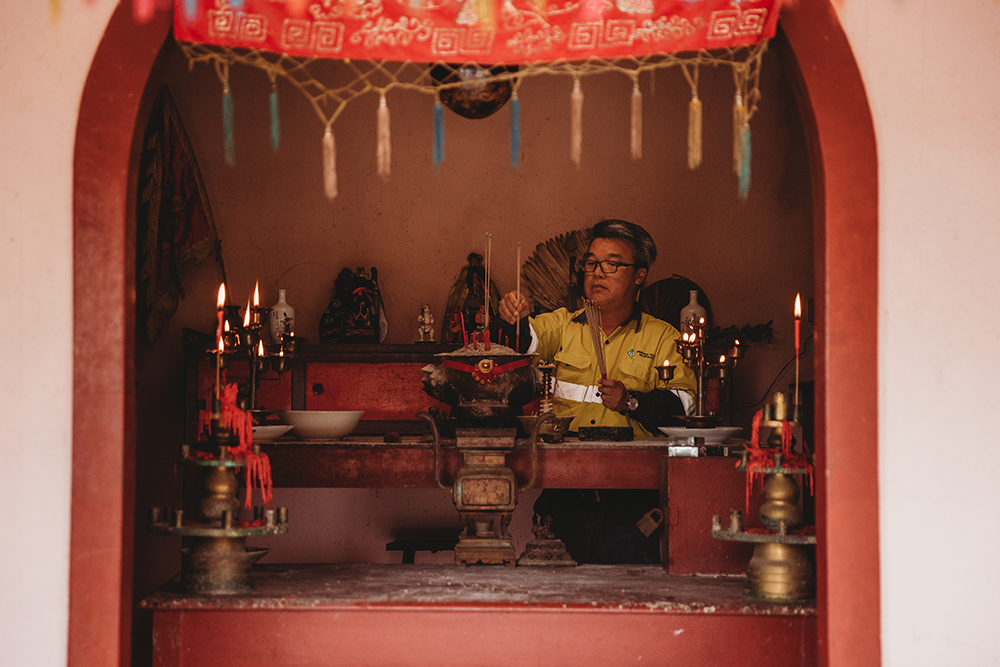 On the western calendar, the Hungry Ghost Festival falls in about August, with activities lighting up the streets of Christmas Island.

“There are other ancestral worshipping festivals throughout the Chinese calendar, but what’s different in this festival is that this one is also performed for those spirits who have no descendants who will pray them,” Patrick says.

“Both Taoists and Buddhists perform rituals to transform and absolve the sufferings of the deceased.”

Chinese locals burn incense and joss paper, a papier-mâché-type material with items such as Hell’s currency and clothes for the visiting spirits. The preparation of ritualistic food offerings is also carried out. The term for ghosts during the month is “the good brother” or “the good sister”.

“Elaborate meals are served for all, the good brothers and sisters are treated as if they are still here amongst the living,” he says

Chinese contract workers came to Christmas Island in the late 1800s when the abhorrent conditions of phosphate mining left hundreds of them dying of poor nutrition, work accidents, and diseases such as beriberi and malaria.

“These miners known as Coolies were either single men, or men who had to leave their family behind in China. They worked their life away in a foreign land that was never their home and in death they were not given a proper burial as they are too far from home,” Patrick explains.

“No matter where you are in the world, if there are Chinese inhabitants, then customs and traditions follow. These miners are intrinsically linked to the Hungry Ghost Festival on our Island.”

The historic Chinese cemeteries on the Island are a reminder of the forlorn deaths of the miners.

At more than 100 years old, the cemeteries are located beside the road to the golf course and adjacent to Phosphate Hill. The unique tombstones, which were created under proper feng shui principles, tell their own story of the history of the Island.

During the festival, locals are known to offer prayers at the cemeteries as well as outside their home. It is believed that offering prayers helps the souls to move on to the afterlife and with the offerings of all that is required to make that journey.

Ceremonies are conducted by the Island’s Chinese community throughout the month.

The Poon Saan Club and the Chinese Literary Association are the two representative associations in Christmas Island’s Chinese community. They will traditionally hold their ceremonies either on the fifteenth day or the last day of the month and it’s common to see hungry ghost flags on homes, businesses and workplaces along the streets. 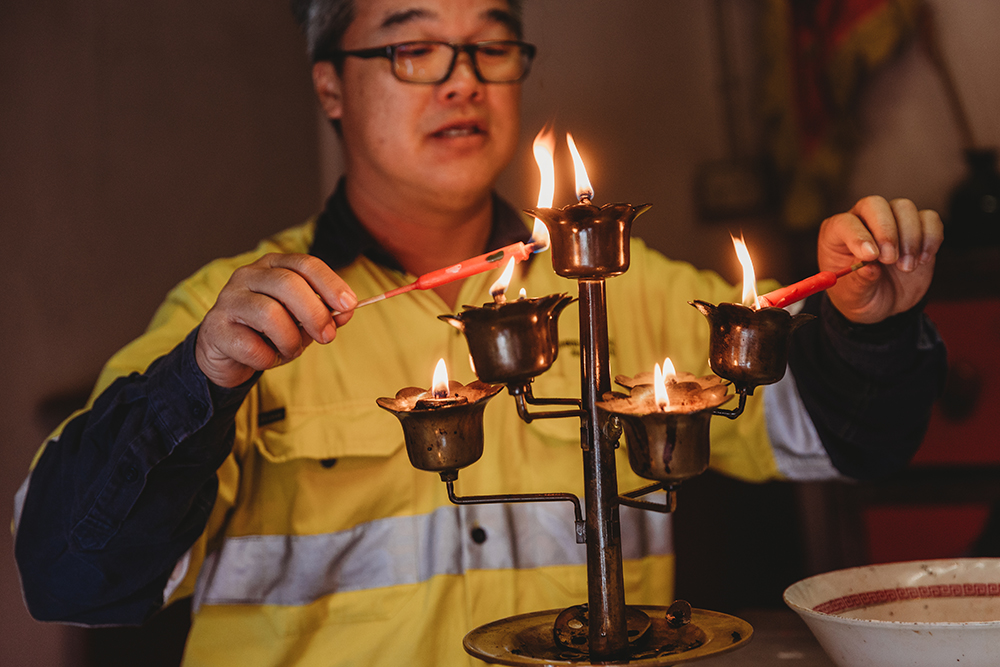 Patrick says there are some do’s and don’ts during the month which should be observed as a sign of respect and to ward off bad luck.

Do’s include to be respectful at the ceremonies as everyone is welcome regardless of faith and beliefs, to keep an open mind and participate in burning a joss stick as an offering, which is no different to laying a wreath in other cultures, and to remember that food and drinks are for all – both living and the dead – but to let the dead have first dibs.

Don’ts include scaring people as a prank, which is not funny; cursing anyone, dead or alive, during the month is signing one’s own sin; and staying out too late at night might find one celebrating with the wrong party, causing bad luck until the next Hungry Ghost Festival.

The last day of the month is also celebrated with a special festival to mark the day the gates of Hell are closed again. 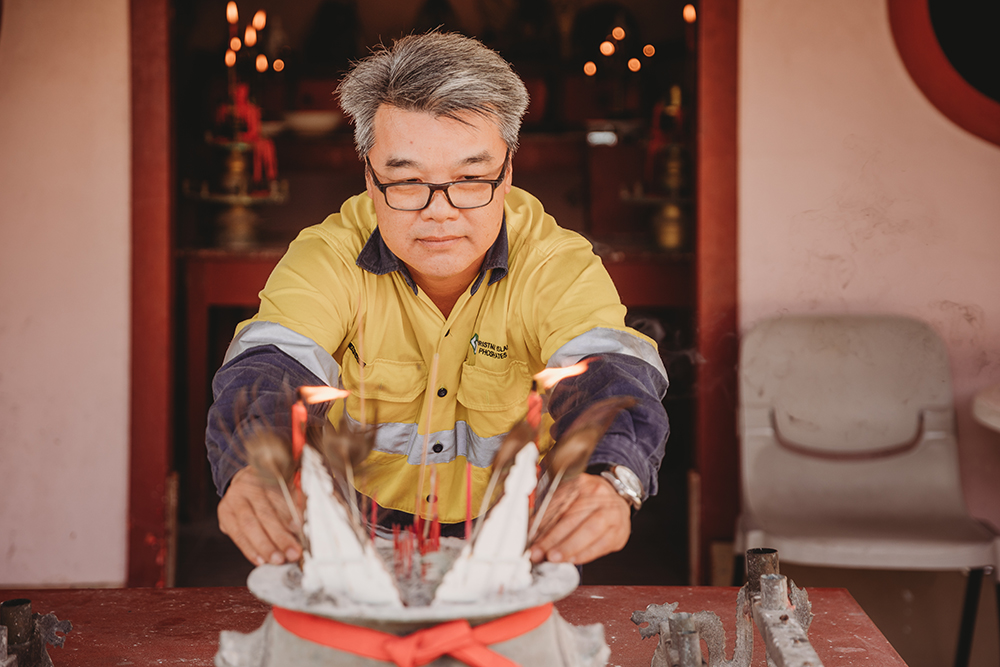 Locals celebrate by burning more offerings in case some ghosts missed out during the one month-long holiday. This is so the ghosts can return to the Underworld with the offerings or make their Journey to the West in good spirits with souvenirs in tow.

“In my mind, this festival is really about reflecting on the past through remembrance and hope to obtain peace for oneself and the departed,” Patrick reflects.

“We are all Hungry Ghosts and we are only here for a brief moment in time.”

The Hungry Ghost Festival is still as popular today among the majority of the Chinese community and the other cultures on the Island as it was in Patrick’s youth, and he will play his part in making sure it stays that way.