Zainal Majid, 62, is one of many Christmas Island locals who is willing to fight for the future of his Island.

A fight, which dates back to the 80s, when Zainal and his community banded together to reopen the mine and prop up their Island’s economy.

“We all contributed financially to support the reopening of the mine. There was a long struggle to get it open, but we did it,” he says.

Phosphate mining is ingrained in Christmas Island’s history and dates back as early as 1891. It survived a Japanese invasion during World War II, but by 1987, drought and low phosphate prices forced the Australian Government to close the mine, creating a huge hole in the Island’s economy.

Back then, Zainal was working as a mine planner and says at that point it was left to the community to fight for their future.

The story is as unique as the Island itself - the only place in Australia, and possibly the world, where locals formed a consortium to become shareholders to reopen a mine, and as Zainal puts it, a story which highlights why this community is so special.

Zainal was born on the Island after his father made the move over from Malaysia in the 1950s to work for the mine.

Zainal says as a child he enjoyed Island life, particularly growing up with his seven siblings.

The now father of four went on to marry and raise a family of his own on the Island.

“It is why I fought for the mine, to ensure our families could thrive on the Island,” he says.

A community banding together to reopen a mine is no small feat, particularly when the government was attempting to depopulate the Island.

But thanks to the leadership from the Union of Christmas Island Workers, a syndicate of employees were able to raise more than $3 million to reopen the mine.

In 1990, it was reopened as Phosphate Resources Limited operating as Christmas Island Phosphate.

“It was so motivating to work with a company that the community built together,” Zainal says.

Zainal became mine planning manager on the Island, and was also a director of the company, a role which helped display his leadership qualities.

“They just needed someone to help guide them and manage the whole mining process,” he says.

Zainal spent all of his working life at the mine and witnessed an Island and workplace which grew from a strong history, union presence and culture.

The Union of Christmas Island Workers was formed in 1975 and led the fight for wage parity and better conditions for the Island’s Asian workforce. It included citizenship rights and things that most Australians take for granted, such as the right to own property. The struggle helped form an important part of the Island’s culture and history.

“The working conditions didn’t improve until the union came along and changed all that,” Zainal says.

Zainal says it’s the relationship between the mine and the community which has allowed the Island’s people to live comfortably.

Although he’s now retired, Zainal wanted to continue his leadership role in the community by opening up his own business.

He now runs the only Muslim Malay grocery store and has become a leader in the Island’s Muslim community.

Serving the community on the Island is in Zainal’s blood. His mother used to operate a Muslim café in the Kampong at Flying Fish Cove.

After some time, he came to realise he wanted to provide for the local Muslim community in the same way his mother once did.

Zainal saw an opportunity and was able renovate an abandoned building to open the speciality store for the Muslim people and the Island community as a whole. He named it Kedai Al-Barakah (‘Kedai’ meaning ‘store’ and ‘Al-Barakah’ meaning ‘by God’s blessing’). The store has received an incredible amount of support from the community. 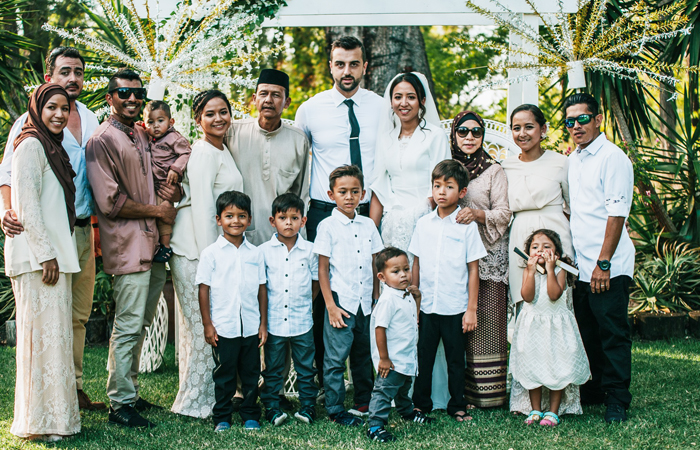