Looking out over Flying Fish Cove on Christmas Island is one of the most visible remnants of the isolated territory’s violent past – the six-inch coastal defence gun.

This single piece of artillery was Christmas Island’s only defence against foreign invasion in World War II, with Japanese vessels stalking the waters of South-East Asia.

Sitting within a gun emplacement, the weapon was made in 1900 and installed at its current home in 1940.

When a Japanese submarine sank a phosphate carrying vessel, the gun was fired in retaliation.

Right next to the emplacement are a series of square buildings which served as living quarters for the British non-commissioned officers who manned the gun, along with 25 Indian troops.

When Japanese vessels commenced submarine and aerial attacks, and shelling from the sea, the Indian troops staged a mutiny, murdering the non-commissioned officers and the British commander.

Christmas Island surrendered on 31 March 1942 and the Japanese military quickly occupied the territory.

To this day, Christmas Island remains the only Australian territory to have been occupied by a foreign power during World War II.

For this reason, the gun emplacement remains a place of significance for Christmas Island’s history.

But to Zaini Ahmad it was just home. 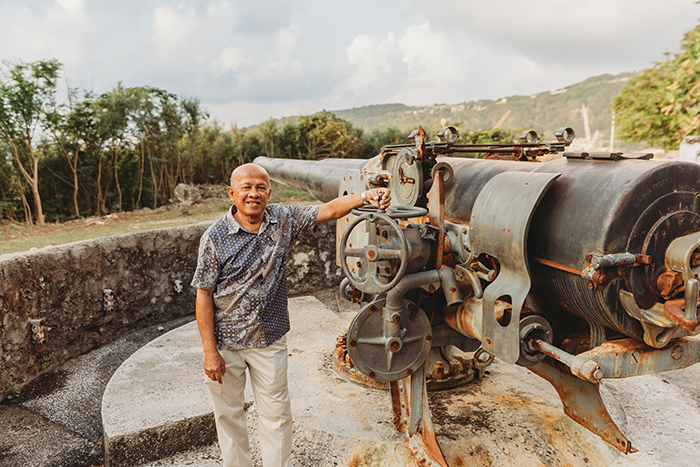 For the first 12 years of his life, 68-year-old Zaini and six other family members lived in the former quarters, within sight of the gun emplacement and the ammunitions storage sheds behind it.

Zaini is a third-generation Christmas Islander, born in Singapore long after the end of the Japanese occupation, but he was raised on the Island his grandparents called home.

Despite the cramped living quarters, he has fond memories of his time living in the area known as Smith Point.

“We grew to like it, at our place we could do anything,” Zaini says.

“We were really near the jungle, we would go and hide in the trees.

Just around the corner from these modest living quarters was the Administrator’s Building, now known as Tai Jin House, and Zaini says he and his foster brother used to sneak through the jungle to peek at it.

Another pastime Zaini enjoyed as a youth was a secret even from his parent, which entailed visiting an old Japanese machine gun shelter set into the cliff face.

“At high tide we could lower ourselves down. We were only what? Nine or 10,” he says.

“If Dad knew we were doing that he would kill us.”

One part he didn’t appreciate was the heat, and he remembers choosing to sleep on a foldout bed under the stars instead of squeezing in to the quarters with the rest of his family.

“So Dad got me this single bed and put it outside and made me like a veranda and I slept there.” 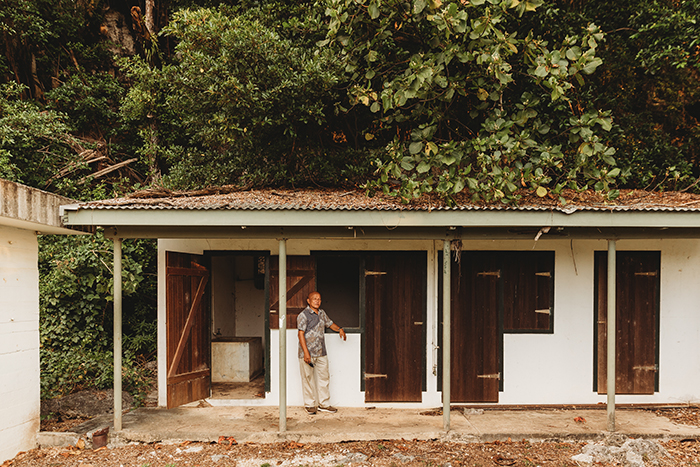 The foldout helped him beat the heat, but being alone outside in the dark meant you were alone with the ghosts.

Zaini used to have to walk home from school one day and he says he saw the aftermath of a car crash on the lawn of the administrator’s building – he believes he encountered the driver’s ghost not long after.

“I saw this wreckage, blood all over there inside the car, I had a good look inside,” he says.

“At night I could smell like there was a dead animal walking around, so I banged on the wall, saying ‘shoo, shoo, shoo’.

“I grabbed some pebbles and threw it at the smell and my hair stood up.

“Dad said I was visited by the woman who had the accident.”

Christmas Island is a small community, but Zaini recalls that as a youth even the nearby kampong in Flying Fish Cove felt like a big city.

“To tell you the truth, we thought the kampong was a big city,” he says.

However, at the age of 15, Zaini moved there and in a surprising change from the shy boy who used to hide in the jungle, he soon became the centre of attention. “It's when I started playing guitar,” he says.

“Whenever someone got married, we had this tent and my band would play.”

He met his future wife playing at his cousin’s wedding and the pair would often serenade locals on the beach.

“I was into guitar and she can sing, so we would go on the beach and play the guitar,” he recalls fondly.

When he left school, he did what most people on the Island did – he started working for the local phosphate mines, completing an apprenticeship as a carpenter.

“We grew up with this, everyone worked at the same company,” he says.

Despite the poor treatment of a lot of Asian workers by the British Phosphate Commission, Zaini says he wasn’t too bothered at the time.

“We didn’t know anything else, we thought we had a great life,” he explains.

In 1977, Zaini was among the Christmas Island residents who accepted an offer of resettlement from the Australian government and he moved to Perth with his wife and two children.

“We went to Perth for the better life and also better money and all of that, because we didn't get much here,” he remembers.

But the allure of Christmas Island’s beautiful waters and community still remained, so the family moved back in 1988 with another child in tow.

“To tell you the truth, we always wanted to come back here,” he confesses.

Zaini has held a number of roles on the Island since he returned, including as part of the push to reopen the mine, working for the Island’s administration and eventually picking up a new trade as a pest controller.

Despite approaching 70, Zaini says retirement from the pest controlling company he started is not on his agenda.

“I don’t think I will retire until I die,” he says.

While Zaini seems set on his future, the Island’s isn’t as certain.

The phosphate mine that has sustained the economy for more than a century is in a slow but steady decline and there is debate about taking steps to extend its life or pivot to a new industry sooner rather than later.

For Zaini, the answer is easy.

“I’m old fashioned, I’d really like the mine to go ahead because it’s ours,” he declares.

“Tourism and all that is really not us.

“But the mine is really ours.”

Zaini concedes that the younger generation might have a different vision of the Island’s future, but he’s confident that it will have one – whatever shape it takes.

“Yes, if things are done right, I’m pretty sure we can do it,” he says.